You are here: Home / Archives for chrysler voyager 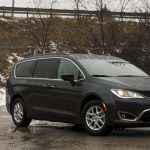 The Chrysler Pacifica name… has been used by Chrysler for a number of vehicles over the years. Initially “Pacifica” was used on a high-end minivan concept vehicle back in 1999, but from 2004 to 2008, Pacifica was designated for mid-size crossover vehicle. The Chrysler Pacifica finally found it’s niche in 2017… [Read More]

Image for representation only. Not all colours and wheels are available on model displayed. Please see your dealer or visit Build & Price for full option details. When properly equipped. Specific model and optional equipment are required to achieve the maximum ratings shown. See your retailer for full details.

Starting at “Starting at” price represents the Manufacturer’s Suggested Retail Price (MSRP) for the base model minus Total Discounts (where applicable). Price does not include taxes, freight (from $1,795 to $2,595), insurance, registration, licence, A/C charge, retailer administration fees and other charges, and new tire duties (in Quebec).

The 2018 Dodge Charger is a full size sedan with a muscle-car heritage. Explore the supercharged features & high performance capabilities of a 2018 Charger.

The 2018 Dodge Journey is a crossover fueled by adventure. Start your adventure by exploring the features, and the build & price tool of a 2018 Journey.

The 2018 Dodge Durango is a rugged yet refined Dodge SUV. Explore the features of this fully capable, mid-sized SUV. Build & price a 2018 Durango today.

The 2018 Dodge Grand Caravan is a versatile minivan for all your daily duties. Explore features of this family minivan and price a 2018 Grand Caravan today.

283 hp and 260 lb-ft of torque paired with 6-speed automatic for outstanding fuel economy and excellent towing capability. See Full Engine Specs Image for representation only. Not all colours and wheels are available on model displayed. Please see your dealer or visit Build & Price for full option details.